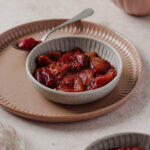 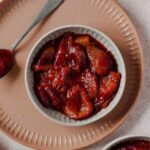 This recipe gives the traditional Austrian sweet side a healthy spin. The Healthy Plum Compote comes without refined sugar but all the flavour, thanks to warming spices like cinnamon, clove, and vanilla. The best part? It only takes 20 minutes to prepare this balanced sidekick.

A compote consists of fruits cooked with a sweetener and spices until they are broken down. Unlike jam, compote still has chunks of fruit in them. Moreover, compote is easier and quicker to make than jam. But this also makes jam last longer than compote.

Classic Austrian dishes like Topfenknödel (curd dumplings) or Kaiserschmarren (sliced thick pancake) would not be complete with a side of plum compote. Or, as we like to say in Austria: Zwetschkenröster.

When reminiscing, I always have my strongest memories when they include food. I remember helping my grandma make dumplings and other doughy sweets as a child to serve with the traditional compote. It always fascinated me how she turned simple ingredients into uber delicious dishes. I learned from an early age that the quality of the ingredients is key to getting the best result when cooking or baking. When making this plum compote, try choosing the fruits and vegetables in season right now and buy local if you can.

Is this plum compote healthy?

While I like the taste of this sweet side, I am not a fan of the amount of sugar the traditional recipe calls for. When it comes to sugar, plum compote is a heavy hitter. So, I was experimenting in the kitchen to make a healthy version of the flavourful dessert.

For this plum compote, I skipped refined sugar entirely and replaced it with just a bit of agave syrup. It provides the right amount of sweetness without being too overpowering. This way, you can better taste the fresh plums cooked to perfection.

Also, use riper fruits if you like the compote to be sweeter. The natural fruit sugar will do its part. Warming spices like cinnamon, cloves, and vanilla take care of the rest regarding flavour. I promise you won't miss the refined sugar after trying this healthy version of the traditional sweet side.

Why you'll love this recipe

This delicious plum compote does with just a few ingredients and is ready in 20 minutes. Here is what you need:

Plums – Use organic and ripe plums. The riper they are, the sweeter the compote will be. Also, try to buy plums when they are in season. Then they have the best taste.

Agave syrup – This plum compote does without refined sugar. A bit of agave syrup is enough to give it the right amount of sweetness without being too sweet. You can also use maple syrup instead of agave syrup.

Ground cloves – In combination with cinnamon, ground cloves make a heavenly flavour. Don't have ground cloves? Use 2 whole ones, and remove them after cooking.

Cut plums and remove the pit. Add to a pot with vanilla extract, cinnamon, cloves, agave nectar and water.

Bring to a boil, cover with a lid and let cook and low to medium heat for 20 minutes.

How do I store this plum compote?

Let the compote cool and store it in a sealable jar or airtight container.

How long does this plum compote keep?

When stored in an airtight container, the compote will keep in the fridge for up to one week.

I already mentioned the traditional Austrian dishes served with plum compote, like Topfenknödel and Kaiserschmarren. But this plum compote is also delicious eaten with other breakfast and sweet treats: 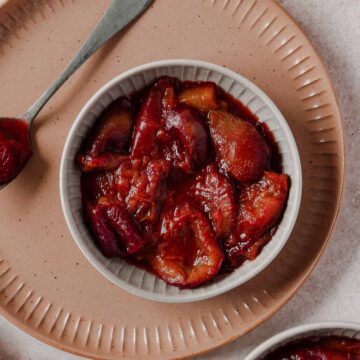 Nutritional values are estimates only calculated with the recipe calorie and nutrition calculator provided by verywellfit.com. The author of this website is not a nutritionist nor a doctor. All nutritional data provided in the recipes and correspondent blog posts are for informational purposes only. Do not use the information as nutritional or medical advice.